It has been a while since I actually put together a craft, so I decided to get back to crafting. I've been thinking about making a toy for my little pet parakeets. Since I posted about Sunny and Sugar, my Lutino and Albino, I have gained another parakeet to keep them company. I purchased a very young one, and I named it Sassy.
Since I have the three birds, I've been hanging out at the Talk Budgies forum to learn more about my keets. They have some very knowledgeable members there and I've found out many things I didn't know about my babies.
The main thing I learned is that my Sunny and Sugar are likely females and Sassy is a young male. Just the opposite from what I have been thinking lately. I guess only time will tell. Maybe I will know for sure if two of them decide to mate or one decides to lay an egg.

I saw a bird toy at a pet store that was made of craft sticks of different colors and beads. I was thinking why would I buy that when I have everything to make it at home in my craft room.
That was about a week ago. Today, I decided to give it a go.

EDIT: 7/25/09
For anyone thinking of making this toy for your pet, I feel I need to point out safety..... always put the safety of your pet first!
1. If you are in any doubt about any product for you pet, do not use it!!
2. Always use common sense and never, ever, let your pets have any toy that might be a safety hazard such as possible tangling, choking, or anything that might be toxic or may cause other bodily harm. Make sure if you tie knots, that your knots are very secure. Keep an eye on your pet's toys. If the toy becomes damaged to the point of being a hazard, remove the toy and discard it.
3. While I do not believe the US FDA approved food coloring is harmful as a toy coloring, if you have any doubts about using food coloring in the US or your country, do not use it. This same toy can be made from uncolored wood sticks. I do not have a source for uncolored wood beads but I am sure they are out there, probably in craft stores.
As I said previously, use a lot of common sense!

(The photos are clickable to enlarge.)

This is what I made and it took less than an hour of actual hands on time. It is very easy to make and all of the supplies can be found easily in most any craft department. 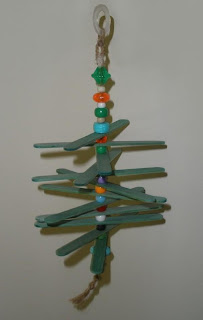 I used Popsicle sticks (I saved from real Popsicles to recycle), washed and rinsed. I boiled the sticks and added some food coloring to the water. I only used a cup or two of water and part of a bottle of blue and also mixed in about half a bottle of green food coloring. Since this was a try as you go and see how it turns out, I did not measure. I just guessed as I went along. After letting the sticks soak up the dye and stirring them around quite a bit, for about 5 minutes or so, I took them out into the sink. I rinsed them several times with cold water until the water was clear. I then put them on a couple layers of paper towels and patted the excess water from them. They did still stain the towels a bit but after placing them on clean paper towels and letting them dry overnight, there was no stain from handling them.

Today, I gathered my supplies:
A plastic ring to attach to the top.
Jute Twine - about 24 inches for this one. 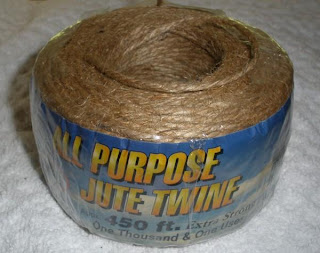 My collection of Pony Beads - any color and number, depending on the length of the toy. 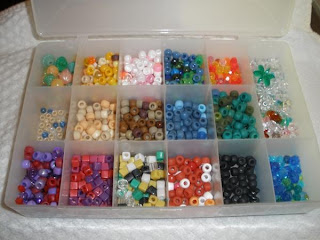 Crop-A-Dile Eyelet & Snap Punch - to punch the holes through the craft sticks. This is one of my favorite toys. A drill with a small drill bit, could be used instead. 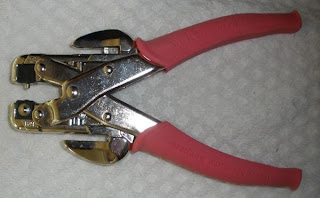 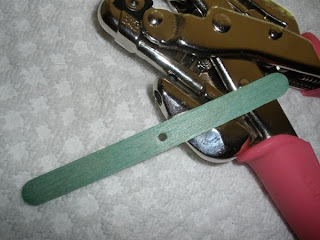 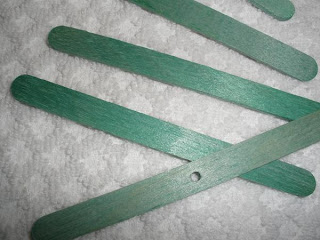 Making the toy was really easy. First I wrapped one end of the jute twine with clear tape to make it slide through the sticks and beads easily. This is what it looks like. After finishing, this tape can either be pulled off or cut off. 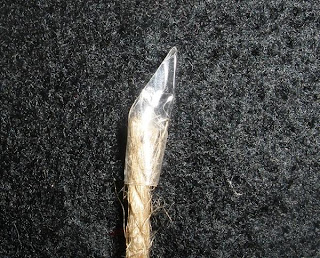 I tied a double knot near the other end leaving a short "tail". Added a small bead, one that will not slip over the knot, then tied again above that bead and added a larger bead that I think will catch my bird's eye. This is the bottom of the toy, I worked from bottom to the top. 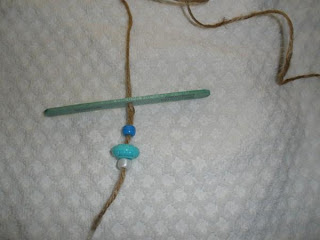 I alternated a bead and a craft stick until I used up the sticks, then added a few more beads at the top for detail. I tied a plastic ring to the top (recycled from a package of blank CD's). After taking this photo, I found a clip and attached the ring to the top of my birdie cage. 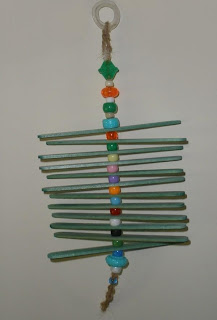 The birdies can chew on the sticks, swing it around and just have fun with it. Before long they will probably be climbing it.
My trio are looking it over really good now as I have just hung it in their house. I think they are trying to decide which bead is the prettiest or which stick they will chew first. 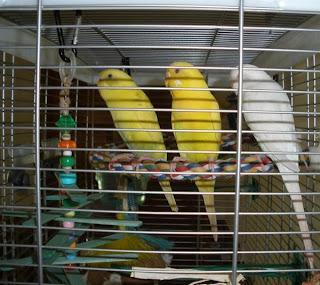 Pop top tabs are not the only little things I save.

Don't you just love to pick up hands full of coins?
These are photos of my accumulation of 10 cent coins! 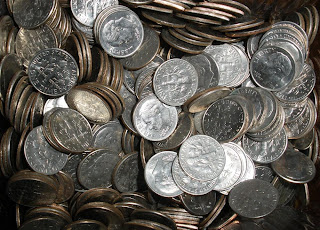 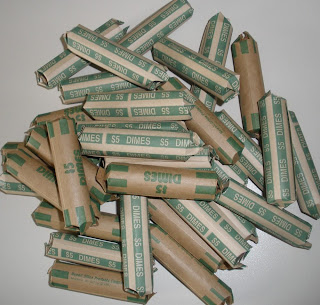 I like to drop my spare change into a container and then as it accumulates, I sort it out by denomination. I have a collection of pennies that I started over 20 years ago. I would drop my pennies in a container and eventually roll them in wrappers. Soon after I started doing that, I decided to go through the pennies and take out the pure copper ones and save only the copper pennies. Our U. S. Mint stopped making the pure copper pennies after 1982. So, when I cash in the rolls, I save the copper rolled coins. I don't know how many rolls I have because they are locked away in a safe place. I do have a container of pennies that I need to search through, but that will be for another day.

Since I just had to replace some major appliances in my home, I can really use some extra money! Now I feel it is time to use these coins that I have been saving for a good cause. I usually save my 25 cent pieces (quarters) until I get several rolls then I use them to buy something that I really need. I just finished wrapping 9 rolls (ten dollars each roll, or $90.00).

To go along with the quarters, I just finished counting and wrapping my 10 cent coins (dimes). I love saving the dimes. I've been saving this collection of little dimes for 4 years. It takes a long time but with being consistent and always dropping them into the dime jar, I've managed to count up 33 rolls at $5.00 each for a total of $165.00 in dimes.
Now, I will be off to make a payment on my new refrigerator, washer and dryer!!
Posted by Joy at 9:18 PM 18 comments:

More Do It Yourself Jewelry

This is the same type kit I used to make the silver color with black earrings and a pendant a few weeks ago. You can see the other set here at this link. I found the kits in WalMart Crafts/Beading section. I really like the turquoise and silver color together.
The kit contained six sections already fastened together. I separated four of the sections then added the end fasteners (purchased separately) to make the bracelet. Then I separated the other two sections and added the ear hooks (also purchased separately) for the pair of earrings.

This is about as easy as it gets to make your own jewelry! 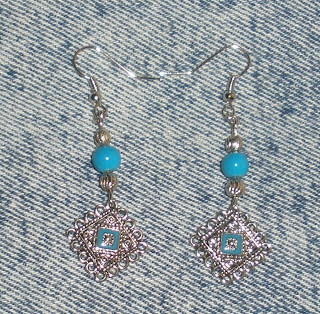 I made this bracelet from a tutorial that I watched on a YouTube Video. You can watch it HERE.
I also found the written instructions with photos HERE on this page of the wonderful Creative Origins blog.
I found these instructions to be very easy to understand.
Thank you Creative Origins for these easy instructions!
I used silver colored wrapped elastic cording and it looks nice with the tabs. I pulled the elastic so that I didn't leave any slack between the links. When I finished and tied it all together, there is just enough stretch so that the bracelet slides over my hand. I used 26 tabs and the bracelet is 8 inches. 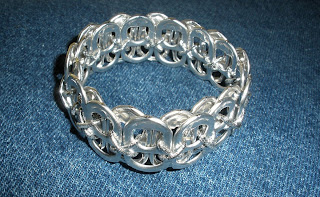 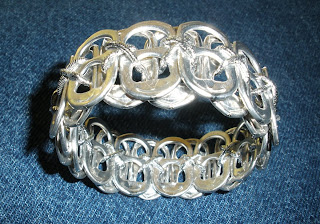 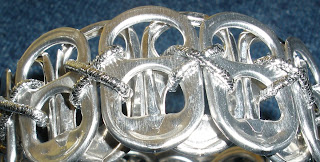 Joy
Through my blogs, I've tried to journal some of my hobbies and interests. I hope you will enjoy reading and looking through my blogs as much as I enjoy putting them together.